First writings: Dr. Kohli was always fond of writing, and getting published. In sixth grade, his first story was published in the handwritten class magazine. In eighth grade, a story in Urdu "Hindostan: Jannat Nishan" was published in the school's printed magazine. He started writing in Hindi during his high school years. As a child author, some of his first stories were published by 'Kishore' (Patna), 'Avaaz' (Dhanbad), etc. During his IA years, 'Sarita' (Delhi) published his story "Paani ka Jug, Gilas aur Ketli" in its 'Nae Ankur' (new sprouts) column. He started getting published regularly only after February 1960. And so he considers "Do Haath" published by 'Kahani' (Allahabad) as his first published work.
Literature: Narendra Kohli is a novelist, short story writer, playwright, and satirist. Despite being all this, he is very different from his contemporary authors. His contributions towards enrichment of literature and society's progress are obvious. He has written some famous tales, but he is truly original; he is modern, but does not simply follow the west; He reaches for the roots of Indian-ness, but he is not old school. Narendra Kohli's short stories started getting published from 1960 onwards. In these stories, he was underlining the dilemmas of society by the medium of simple family events and characters. 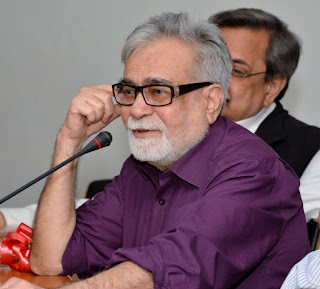 He started writing satires around 1965. His language had become sharper and the ironies of the nation and politics were coming to the fore. In his writings of these days, he demonstrated the inhumane cruelty and complete lack of rationality in the social and political events around him. All of satirical literature itself is a witness to his uniqueness in a generation of writers, of his experimentation, variety and directness in his satires. He wrote a few novels based on the life of families and societies as well. But just portraying the society, or ridiculing its flaws and dilemmas was not going to satisfy him. He wanted to fix a lot of this. He realized, that literature can not reach its ultimate completeness just by a narrow, partial and limited display of society, nor can the society benefit from such literature. The demonstration of poor human qualities will only encourage the evil and the foul. Therefore, it must be the goal of literature to demonstrate the great, honorable and moral aspect of life.
Narendra Kohli took the entire material of Ram Katha and wrote a huge 1800 page novel "Abhyudaya" in four parts. This was perhaps the first novel in any language that dealt with the entire Ram Katha. It is a novel, and therefore must be contemporary, progressive, modern, and logic based. Its basic story line comes from the cultural tradition of India and therefore it portrays the higher values of life. It shows the greatness of human kind, and the boundlessness of life.
The hindi literature world was like woken up in a shock. The reader was freed from all dilemmas of his intellect and his traditional values. He got answers to his defiant questions, and solutions for his doubts. This book was hugely welcomed, and it changed the direction of Hindi novels.
Narendra Kohli's "Abhigyaan" was a novel based on Krishna Katha. The plot is political. As prosperous and influential Krishna publicly declares poor Sudama a dear friend, Sudama's stock instantly rises in social, professional and political arenas. But its spine is Bhagvat Gita's Karma philosophy. But in this book, there is no heaven, no hell, no re-incarnation. The concept of Karma has been explained as during just one life, on this very earth, in a very scientific manner on the basis of human senses and mind. And that too, in the form of an interesting, gripping novel. This is both wonderful, and unprecedented. It is impossible to ignore the power of such logic oriented style.
Then Narendra Kohli started working on his Mahabharat based novel 'Mahasamar'. Mahabharat is a huge epic which presents Indian life, philosophy and behavior in an unmistakable fashion. Narendra Kohli brought this epic to life in this age of ours. In this novel, he has presented life in all its grandeur in a most original way. He answers real questions of life in both a logical, and an intuitive manner. You may expect to read Mahabharat when you pick up this book, but will find it closer to your own life. You will see the characters of Yudhishthir, Krishna, Kunti, Draupadi, Balaram, Arjun, Bheem, Karna and others form a very new perspective. But Dr. Kohli believes his interpretation to be truly what Mahabharat portrays in the original via these characters.
Narendra Kohli then surprised his readers with a new series of Novels. "Toro Kara Toro" is a title obtained by translating a line from a poem by Ravindranath Thakur, but the novel is based on the life of Swami Vivekanand. This was a bigger challenge. Swamiji lived only a few years ago. All events of his life are well documented in history. There isn't much room for a novelist's own creativity, imagination, or thought. The only possible way for the author is to be in complete sync with the personality and philosophy of his hero. But where was the need for a novel about his life, when there are multiple authentic biographies of Swami Vivekanand available. Perhaps those who are fond of Swami Vivekanand, but lack the ability - or interest - to read, understand and absorb the many biographies and philosophical articles needed such a novel. The synchronization of the author with his hero on each and every page of this appealing novel is pleasantly surprising for the reader. Swami Vivekanand's life was all about breaking the chains and restrictions - natural, social, political, religious, or spiritual - whatever the restrictions may be.
In Narendra Kohli's own words, "Swami Vivekanand's personality has an attraction - no not attraction, magic. Magic that completely overwhelms you. No sensitive person can resist being impressed after getting to know Swami Vivekanand. And young at hearts just go crazy with excitement. There is no quality that Swamiji did not possess. He was the epitome of human development. He and the Indian spirit were one. It would be both ignorance and injustice to limit him to any one age, region, religion, or organization." Narendra Kohli is in synchronization with such a Swami Vivekanand, and this novel brings the reader to the same level with the legend Vivekanand.